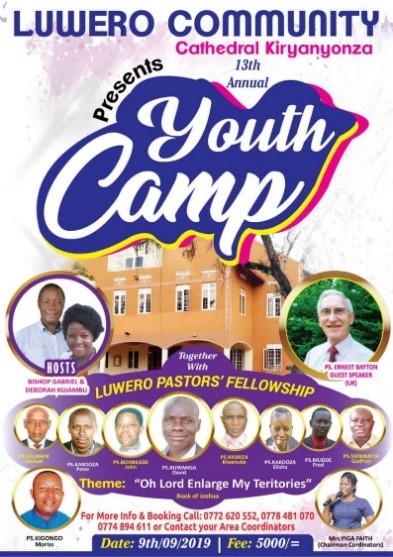 The 13th annual Youth Camp is scheduled for 9th to 14th September. This year’s theme is, ‘O Lord, enlarge my borders’ (1 Chronicles 4:10; The Prayer of Jabez); the theme is being developed with a series of studies on the life of Joshua.

The camp, as in previous years, is residential and will include workshops, sports, games, competitions, choirs, health programmes and community involvement. The speakers shown on the poster will be at the camp on various days, teaching, leading and running the all week’s programmes.

Gabriel has predicted that 1200 young folk – between the ages of 14 and 35 – will be in attendance.  Most of the delegates will be residential although some will attend daily.  Most will come from across Uganda, the others will travel from Rwanda, Kenya and South Sudan.

The camp will be advertised on local radio as well as through churches and locally displayed posters .

Ernie Bayton will again be speaking at 12-15 sessions including workshops over the 6 days. He will be joined this year by Peter Apolo, a Kenyan pastor and friend of Gabriel, whom he met when studying at Capernwray Bible School in Cumbria.   Peter plans to speak and lead a series of studies on the book of Ephesians

Thirty students from the ICCU (International Christian College, Uganda will attend at the same time as the youth camp but have their own programme led by local pastors.

Some of you may already be aware of the work done at the Project by the recent visitors from East Kilbride in Scotland.  During their two-week stay they achieved the following:

If you would like to read about their visit in more detail, visit the News section of the website and take a look at the photographs in the new Luwero in Pictures section.

Gabriel Will Be Visiting Supporters

Gabriel plans to visit Germany and the UK this autumn. He will be in Germany for the first three weeks in October and in the UK during the last week in October through to mid-December. His UK itinerary is currently being planned and will include visits to Worthing, Northamptonshire, North West England, Scotland and Northern Ireland. Anyone wanting Gabriel to visit their area should contact the office via the website.

Last August I reported that Luwero, like the UK, had experienced a shortage of rain and that some of the wells in the community had dried up.   I am delighted to inform you that the 2 new wells drilled over the summer months are working well and yielding a steady supply of fresh, clean water.  In addition, the recent rainfalls mean that the existing well outside the clinic is working well too. 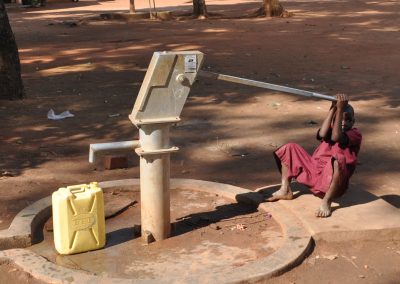 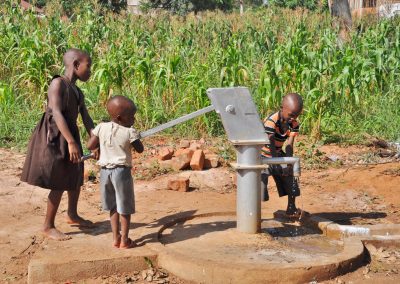 School pupils are busy preparing for their end of term exams. The school term finishes on 24th August and recommences at the end of September. 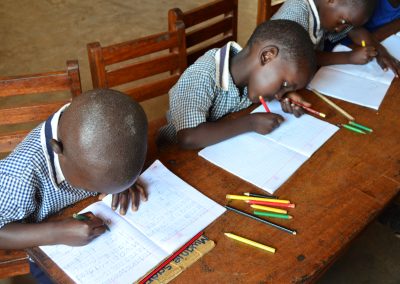 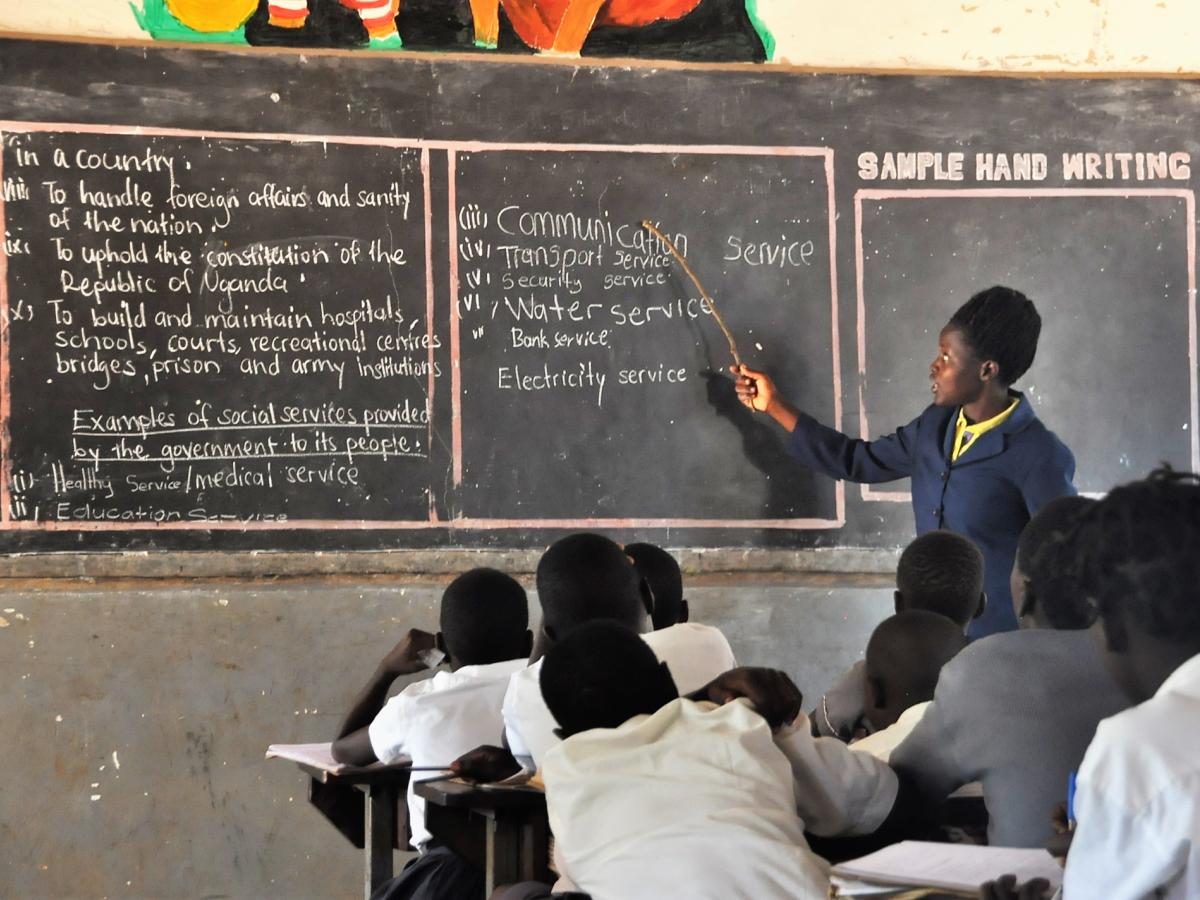 2020 Luwero Calendars will be available from October this year.  Details will be included in the next Newsletter.  As usual, copies can be ordered via the office. 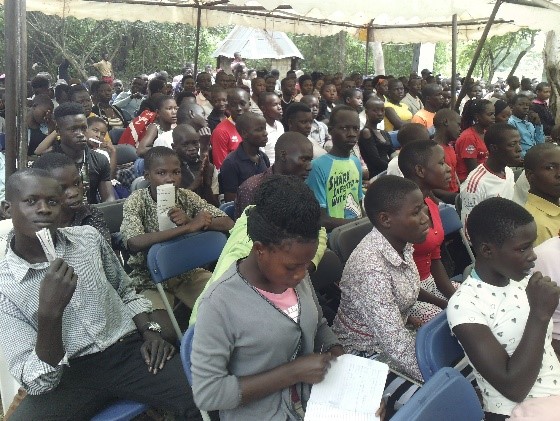 Luwero’s 12th annual youth camp took place between 10th & 15th September. The theme was ‘David: A man after God’s own heart’ and involved a series of studies about the life of King David including his anointing and his contacts with Saul, Jonathan, Goliath, Abigail, Mephibosheth, the Amalekites, the Philistines, Bathsheba, etc. Time was also taken to study some of the psalms penned by David. A total of 16 teaching sessions and several workshops, each lasting between 1 and 1½ hours, were held over the 5 days. Other local speakers also attended for some teaching sessions. Each day commenced at 5.00 am with ‘Morning Glory’ – a time of worship and praise and concluded with ‘lights out’ at 10.15 pm. 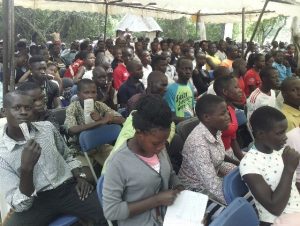 Approximately 750 young people attended this year’s camp representing 20 different tribes from across Uganda, Rwanda and South Sudan and drawn from numerous churches from various evangelical denominations. A key highlight was the fact that during the week 25 young people professed to accept Jesus as their Saviour.

As well as plenary teaching sessions and workshops this year’s camp activities also included, community support initiatives including visits to the local hospital, prison and police station where gifts were given to patients and prisoners as well as time spent talking to and praying with them, HIV/Aids testing clinics, games, sports, competitions, singing and dancing. Visiting guest artistes and other singing groups were present on a daily basis. A special event was also held this year to celebrate the fact that 25 couples first met at the youth camp and have subsequently married during the past 12 years. The final camp session was an all-night prayer time on Friday night/Saturday morning.

Again this year we were able to present Bibles to all the young folk who did not have their own copies. Gift presentations of Bibles were also made to the armed police guards who oversaw security at the camp during the week. 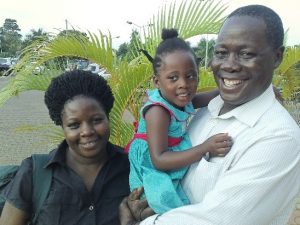 Once again the organisational arrangements for the camp ran smoothly. Gabriel divides the practical issues relating to the camp into about 25 sections including issues such as stewarding, registration, PA, music, cooking, interpretation and translation, dormitory facilities, etc. Each activity is overseen by a local pastor and a small sub-committee who are responsible for the detailed arrangements. Gabriel and Deborah seen here with Priscilla, their daughter, are hosts for the camp. 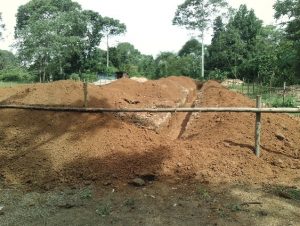 In addition to the camp being in session other work at the project continues including the excavation (by hand) of the foundations for the new boys dormitory block at the secondary school (see left), and more modules of teaching for the students attending the International Christian College Uganda Bible School which is being developed. During my visit it was also possible to check all of the corrections which require to be made to John McQuoid’s book ‘Knowing and Doing’ which has been translated into Luganda, the main local language, and which it is hoped will be published later this year. 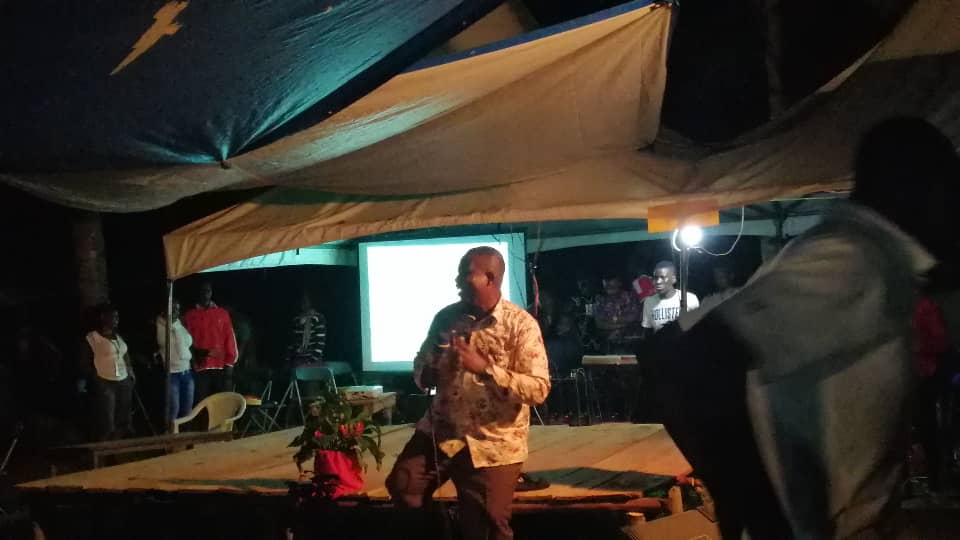 The 12th Annual Youth Camp and Luwero Pastors’ Fellowship has just ended, and  it was a resounding success.  People from Uganda and beyond gathered at the Project to share their faith, listen to the messages of the speakers and enjoy the company of fellow Christians.

The theme for this year’s conference was ‘David: The man after God’s own heart’ and was a series of studies in the life of the Old Testament character King David.   The camp, as in previous years, was residential and included workshops, sports, games, competitions, guest artistes, choirs, health programmes and community involvement.

Gabriel was delighted with how the camp went and has this message for all supporters:

“Praise the Lord everyone. God is good all the time and all the time God is good and that is his nature.  We had a fantastic week with 758 boys and girls at our annual youth camp this month.  During the camp more than 25 young people gave their lives to Christ.  We are so excited about what God is going to do in their lives.  We thank the Lord that men of God like Pastor Ernie who have inspired us for the last 13years.  His anointed message challenged and changed many.

The spiritual leadership, reflection, discussion and fellowship enjoyed during the camp will stay with us for the rest of our lives.  Uganda is on fire for Christ.  Thank you all for always loving us. God bless you all for your prayers and support.

Get ready for the Pastors and Leaders conference in May 2019!

God bless you all.