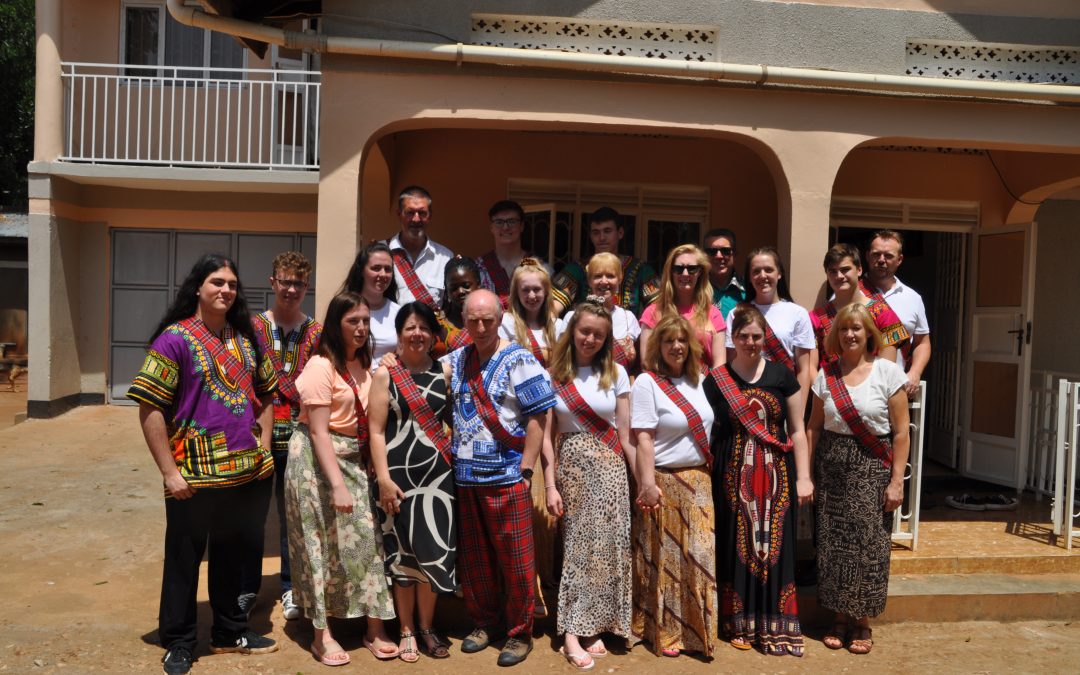 We gathered in East Kilbride on the morning of Tuesday 2nd of July excited at the prospect of journeying together to Luwero via Edinburgh Airport, Istanbul Airport, Kigali in Rwanda and on to our ultimate destination of Entebbe Airport.  Little did we know what the journey had in store for us.

We were aware that the turnaround at Istanbul Airport was tight, just over 90 minutes, but were primed to make it work.  We were delighted to find that the gate we landed at was the same gate we were to depart from, meaning we did not have to negotiate the airport and the time pressure just disappeared.  As it turned out, the plane we had just disembarked from was to be the same plane we would be flying in for the remainder of our journey.

The onward flight passed without incident until we arrived at Entebbe Airport.  Imagine our horror when we discovered that our 40 cases had been removed from the plane at Istanbul and not put back on.  This was the same aeroplane remember!  We spend a total of 3 additional hours in the arrivals area completing forms individually to identify our luggage.  Having been told that it would be 2 days before we could be reunited with our luggage, we then engaged in a “full and frank exchange of views” with the manager and received an assurance that we would get them the following afternoon.  We were not happy.

Deborah had arrived an hour early to meet us along with some others to help with the luggage.  She began to think that we had missed the flight until we managed to contact her via text message.  We eventually set off for Luwero for the 3 hour journey to the Project.

Our welcome was everything we expected and it was a delight to be back among Gabriel and his team.  Half of the party had been before and knew what to expect but the folk visiting for the first time were overwhelmed by the warmth of our reception.

Despite the assurance of the office manager at Entebbe, it took 2 days for 39 of the cases to arrive and 3 days for the last one.  Deborah managed to produce clothes for us to wear until our own arrived.

We had negotiated with Gabriel that we would undertake 6 main projects whilst we were in Luwero;

I am delighted to report that we were very successful on all fronts.

Callum, our dentist, became a celebrity during our visit as he had a constant stream of patients from the school and the village of Kiryanyonza.  He worked tirelessly during our stay, supported by a variety of helpers, particularly Nurse Rose, who organised all the patients, and Gerard from the local hospital who acted as translator for some of the local villagers.  During the time he was there he extracted 427 teeth from 380 patients!  He reckons this is more “detoothing” than he has done in his practice in the last decade.  Callum hopes to put in place a series of yearly visits involving himself and  his colleagues from the practice, to ensure that the improvements in dental health will be sustained. 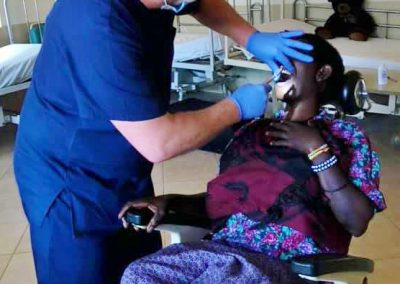 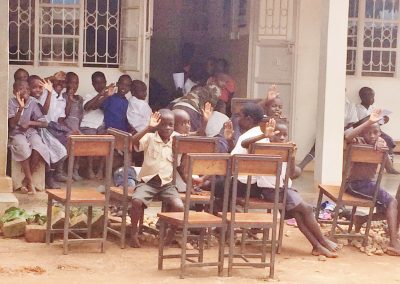 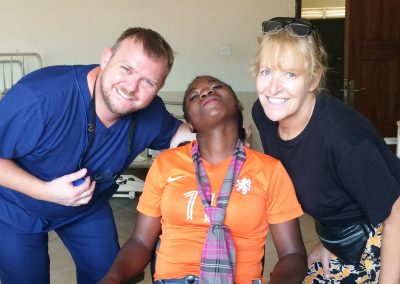 The major physical project was the preparation of the boys’ dormitory.  The first floor has been constructed but was only completed to a rough finish.  The dormitory comprises 4 rooms – a Housemaster’s room, two large dormitory rooms with shower blocks and a large store.  Roughly 80 metres long, it was to be a major undertaking to get it ready on time for its official opening on the Monday before we left.   The work comprised scraping and sandpapering the entire inside and outside of the building and the windows to get it to a level of finish where it could be whitewashed to reveal if it was ready for filling and painting.  Around a dozen of us worked all day for 8 days to scrape, sandpaper, apply 2 coats of whitewash, sand again and apply the final undercoat so that the painters could apply the final finishing coats.   It was extremely dirty, dusty, hot work – but we managed to persevere and get it completed.  You can see the transformation of the building in the accompanying photographs. 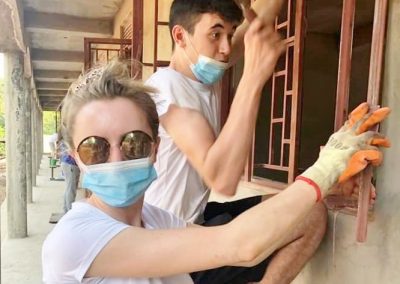 Working on the dormitory 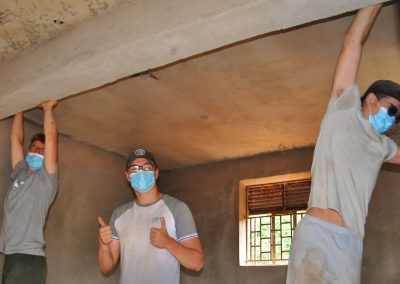 Scraping the roof and walls 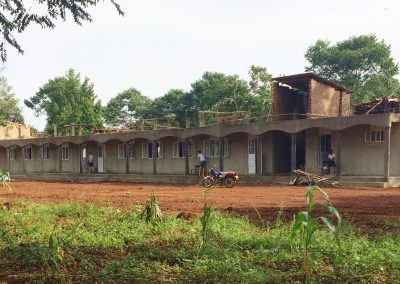 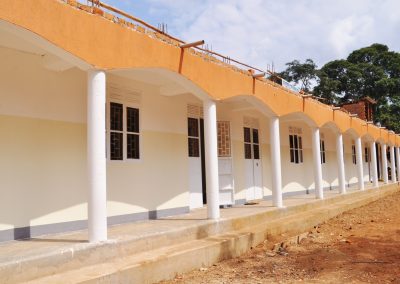 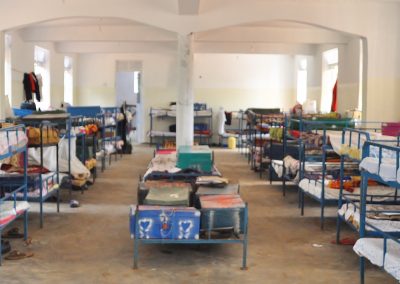 In our interactions with the schools we had a team of 3 secondary school Geography teachers who worked collaboratively with colleagues from Luwero Community Secondary School to plan and deliver a series of lessons on climate and weather.  All the teachers felt the benefit of the exercise and the pupils engaged well with the topics.  In the primary school, our Primary HT Julie worked closely with Headteacher Harriet to plan and deliver learning to the lower primary pupils.  The areas of similarity and difference were fertile discussion points for the two ladies. 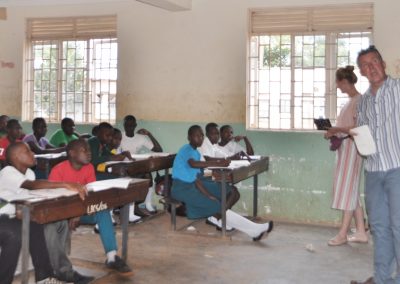 Perhaps the most obvious difference to the appearance of the Project was to be seen in its sports facilities.  When we arrived, these consisted of a football pitch and an area for playing netball.  During the course of the 2 weeks the outside games area was transformed.  During this time we managed to measure out and line full-size basketball, netball and volleyball courts.  The netball hoops were replaced with regulation-sized hoops and the stands painted – one in Scottish colours and one in Ugandan colours.  With the help of several of the upper primary and secondary boys, we managed to dig and lay foundations for new volleyball posts and new basketball stands.  We had brought over new basketball hoops and nets and a new volleyball net.  Erecting the posts and stands involved us working late into the evening by the light of headlamps and arc lights to get the posts concreted into position and supported whilst the concrete dried.  Once dried, the backboards were painted with a Saltire and Ugandan flag to emphasise our partnership.  The new sports facilities are the envy of all other schools and the basketball court is the only full-sized, fully equipped one in the county.   The pupils were ecstatic about the few facilities and were putting them to good use whilst we were there.  Teacher Joel, the sports master, was particularly pleased, as this adds a whole new dimension to the sports curriculum within the secondary school. 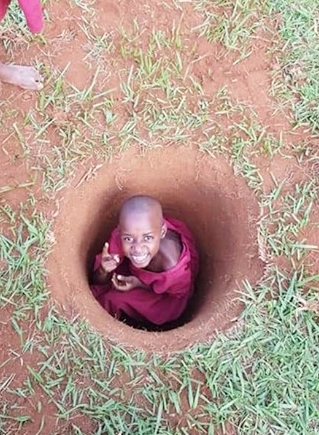 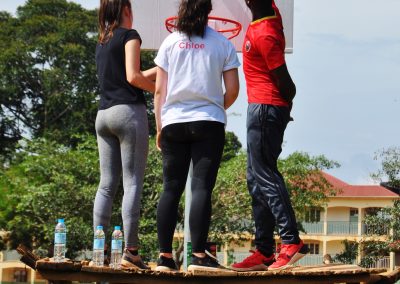 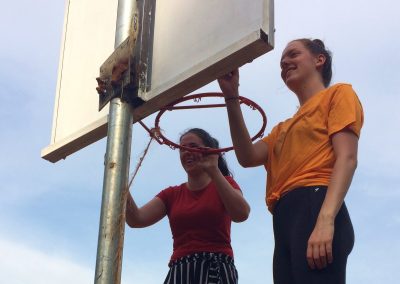 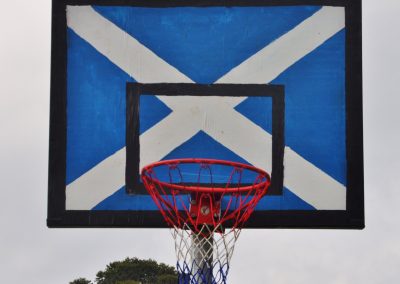 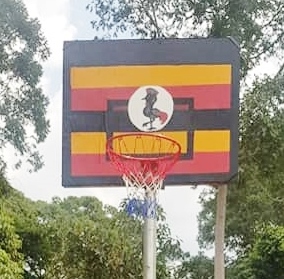 The vocational college sprung to life upon our arrival as we had three experienced sewers and knitters within our party.  We had arranged with Gabriel to have sewing machines serviced and ready in one of the college rooms and this became a base for both teaching the pupils and training a few members of staff how to deliver teaching once we had gone.  Our philosophy was to leave a legacy and not just provide a brief distraction.  The boys and girls were shown how to cut out from patterns and sew the parts together using the machines.  The biggest hit of the handicrafts, however, was the pompoms that the pupils could create quickly and easily.  At times the class was inundated with boys and girls all making pompoms.  Thread, material and wool have all been left to allow the initiative to progress in our absence under the stewardship of the staff members. 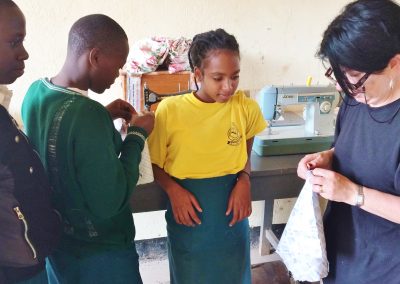 Learning how to sew 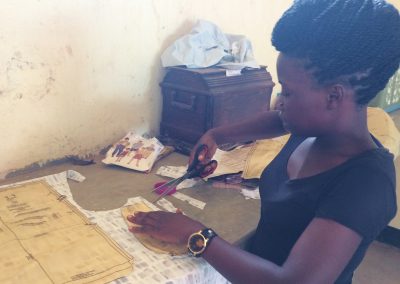 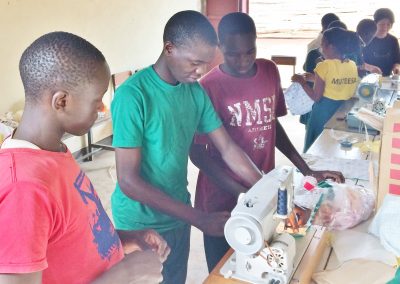 Prior to the visit, I had been asked by Ernie Bayton to take pictures of all the aspects of the Project so that folk who have not been can visit the website and see the aspects for themselves.  I have taken the pictures and they will be shown in galleries on a new section being added to the website.

I would like to express the gratitude of all our group to the people who supported us financially and in prayer to allow us to visit and return safely.